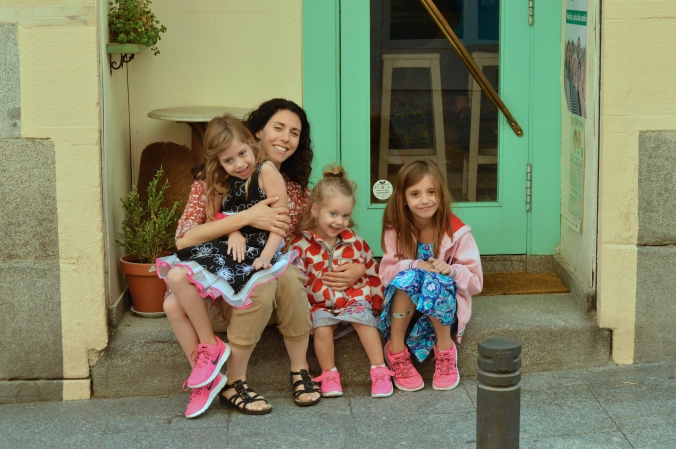 Our first morning in Madrid, jet lagged and so very tired, we slept through the breakfast offered by our hotel. When we finally emerged from the bliss of sleep after a long day of traveling, we ventured out to find some food. Tucked away on a small side street several blocks from our hotel was a small cafe. We decided to give it a shot.

It was a Saturday morning, and customers were leisurely eating their food and reading the morning paper. I love how customers brought their dogs into the cafe! There was one woman who sat at a table by the window drinking her coffee and reading the paper the entire time we were there. Her little beagle was curled up contentedly at her feet. They made such a picturesque site with the morning light streaming in through the window!

It came time to order our food. My children were smart and went with the “classico”, which turned out to be toast with jam, a pretty safe choice. I was feeling a little adventurous, and decided to try the “espagnol”. I also tried to use what little Spanish I know to order orange juice as well. My husband amusedly smiled at my attempts. When I asked him what was so funny, I learned that in Spain juice is zumo, not jugo like in some other Spanish speaking countries. At least my orange juice came without any problems, so the waiter still understood me, even if I used the incorrect version of “juice”.

And then the “espagnol” came. This culinary concoction was toast with diced tomatoes and jamon on it. Jamon is a Spanish ham that is cured, or cooked with chemicals instead of with heat. I was optimistic. I like ham and tomatoes. It turns out however, that jamon on a jet lagged and slightly queasy stomach is not a really good idea. I bravely took about three bites before deciding that to continue to eat my “espagnol” was a very bad idea. I ended up eating a croissant; a buttery, flaky, and completely safe croissant. Indeed, from that morning on, a croissant became a staple in my breakfast for our entire trip.

So, my first experience with Spanish food wasn’t as successful as I would have liked. But the cafe was quaint. Everyone was energized for a day of site seeing. And that first foreign taste of Spain just made us more excited for the travel adventures to come.

3 thoughts on “Madrid: Breakfast with the Locals”