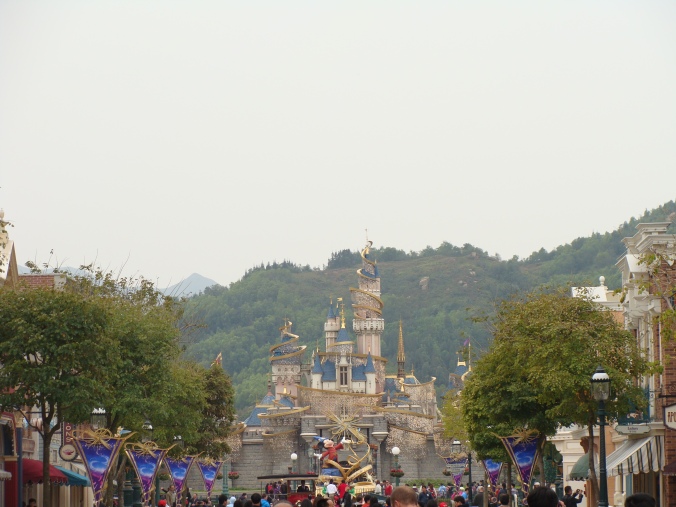 After our recent trip to Disneyworld, I’ve been thinking about all our trips to Disney Parks. I fondly remember our trip to Disneyland in Hong Kong. It is a smaller park than the other Disney parks we’ve been to, although it has undergone an expansion since we were there in 2011. It is much less crowded than the other Disney parks. And, there is the added fun travel factor of hearing and seeing Chinese everywhere in the park.

There is one thing that Disneyland Hong Kong does better than all the other Disney parks we’ve been to. The Jungle Cruise. Disneyland California has the classic version. Disneyworld in Florida has an upgraded version with an ancient temple you travel through in addition to the classic elements. Disneyworld Hong Kong has an awesome surprise ending. Do you want to know what it is? Watch a video of it here.

Isn’t it an amazing end to the ride? We were not expecting it when we first rode the Jungle Cruise. You can feel the heat of the flames shooting out of the rock formations, and it is hot! The Jungle Cruise was our favorite thing in Hong Kong Disneyland.

She was a little nervous at the time, but so happy she did it afterwards! Where else do you get a chance to dance in a Disney parade? I think we might have to go back and do it again when she is older so she will actually remember the experience, instead of just seeing it in pictures. Since Hong Kong itself is a great destination, I don’t think I’ll have a hard time convincing the rest of the family that we need to go back.

In all the parts of Hong Kong we visited, people loved to take pictures with our kids, of our kids, sometimes they would just pick them up and hold them. This was especially true at Disneyland. Our youngest at the time had very blond hair. I remember waiting in the line for Winnie the Pooh, and people kept passing her down the line so they could all have turns to take pictures with her. A little unnerving, but thankfully everyone was really sweet to our children the entire time we were there.

So, for an amazing Jungle Cruise experience, and a whole lot of other fun, take a day or two to visit Hong Kong Disneyland if you’re in the area.

4 thoughts on “The Best Jungle Cruise”